This month, we have an Expo managing editor Laura Rensing.

Disclaimer: I do feel that as far as the palette of Exposition Review editors goes, I am the junk food addict who always means to get on a balanced diet but only keeps at it long enough to post a few Instagram pics of my new lifestyle before sliding back into the greasy pulp fiction goodness. If the rest of the managing editors are canapés served on the lido deck, I’m the bag of Cheetos you dig out from under your bed in the middle of the night, crunching silently so that your mother doesn’t wake up and judge you.

Not that that situation has ever happened to me.

I’m more of a barbeque chip kind of girl. 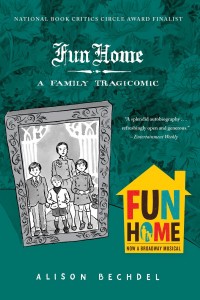 The Expo Editors can blame Fun Home for this blog being late, as I knew halfway through the book that I wanted to include it in my recommendations. I saw the award-winning musical adaptation of this graphic memoir and immediately wanted to read the source material. Written by Alison Bechdel (of the Bechdel-Wallace Test), Fun Home is a ruthless examination of Bechdel’s complex relationship with her father, as well as both father’s and daughter’s experiences with their homosexuality. Anchored by literary allusions instead of a linear timeline, Bechdel artfully combines simple comics with vocabulary you haven’t seen since you were studying for the GRE. If you can, do take time to see the show or listen to the music because both are fantastic companions to the book. The musical draws out several of Bechdel’s experiences, providing a richer climax than in the memoir, while the graphic novel is a much more thorough and detailed account of events. 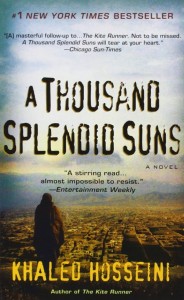 You’ve probably heard of Khaled Hosseini’s novel The Kite Runner, but his second book makes his bestselling debut look like the opening act to Lady Gaga. A Thousand Splendid Suns follows the lives two Afghan women; one a well-off and well-loved girl from an educated family, the other an unwanted and illegitimate child. In spite of their different backgrounds, circumstances bring the woman to become friends—a relationship they desperately need to survive their unforgiving circumstances. It is a powerful and insightful glimpse into the lives of Afghan women, and the storytelling is as beautiful as the events that befall the characters are heartbreaking. 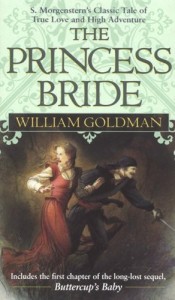 The Princess Bride? Inconceivable! Often eclipsed by the 1987 movie, William Goldman’s book offers all the same glee and swashbuckling adventure of the film (and no wonder, since he also wrote the screenplay). It’s a worthwhile read alone to learn Inigo’s full journey to find the six-fingered man and to travel all five levels of the Zoo of Death, but savvy writers and readers will appreciate Goldman’s ironic portrayal of a writer in Hollywood and the politics and legalities that follow. In the book, Goldman provides a fictionalized version of his own life as he “abridges” the satirical Florin (not a real country) classic, A Princess Bride by S.L. Morgenstern (not a real author). In a truly Inception-esque move, Goldman satirizes a “satirist’s” satirical novel, but the characters are so well-conceived that The Princess Bride is enjoyable even when taken at face value. If you just cried your eyes out reading A Thousand Splendid Suns, you’ll cry tears of laughter during the bald princess scene. 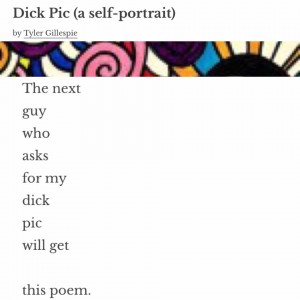 Despite having interned at a poetry press for three months, modern poetry often confuses me. Are they being obscure on purpose? Do I just not get it? So when I came across a poem entitled Dick Pic in the slush pile, I expected it to suck. Instead, I was instantly blown away by Tyler Gillespie’s deft use of humor and blithe commentary about the twenty-first century’s contentious views of privacy, sexuality, and politics that is even more timely in 2017 than it was when I first read it in 2015. But Gillespie’s master stroke is in the poem’s formatting and structure. He gleefully uses line breaks mid-word to create double entendres enviable by even the most dexterous pick up artists, and even the thin columns play a willing member in Gillespie’s work. Read this upstanding work in Vol. I: “IX Lives.”

All puns in the above paragraph were most definitely intended.

One thought on “Expo Recommends with Laura Rensing”