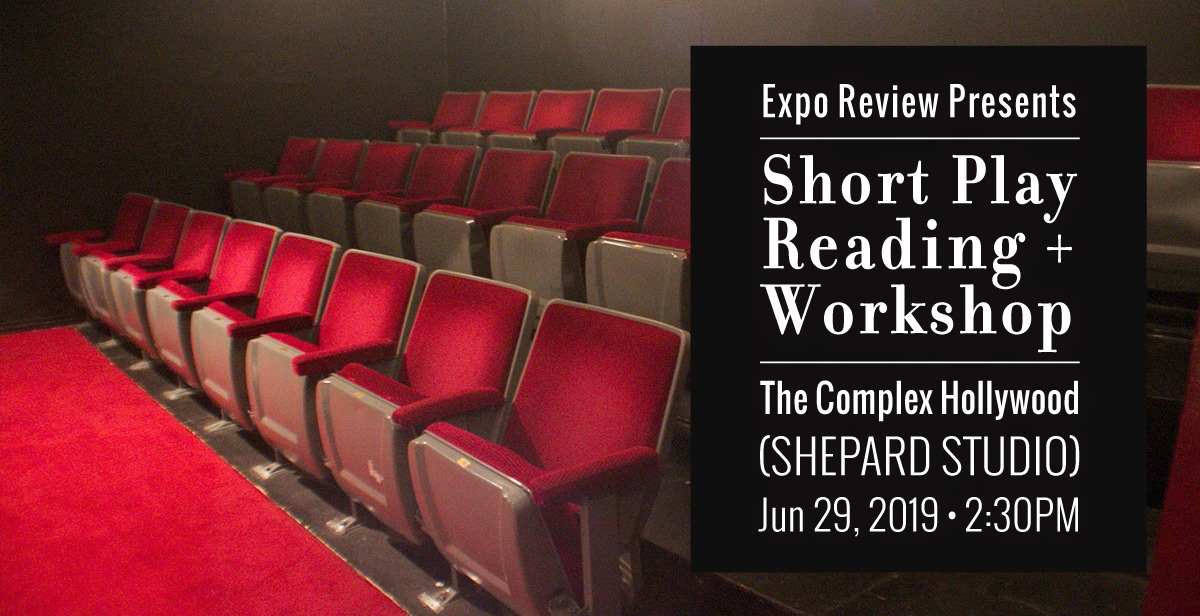 This year’s Short Play Reading + Workshop combined one of our favorite #ExpoPresents events of the year (the reading of stageplays and screenplays published in Exposition Review) with one of our signature micro-workshops. This year, we headed to The Complex Hollywood and joined up with Hollywood Fringe Festival to bring works off the digital page and into the theater. We continued with a Q&A with the writers and directors followed by a micro-workshop focused on crafting short plays.

We began with “Anna Considers a Cocktail” by Ruben Grijalva directed by Maureen Lee Lenker, who also played the lead. Maureen brought humor and sincerity to the play, in which a woman considers the first sip of her cocktail—along with the recent demise of her relationship and job—in a series of digressions delivered to an unsuspecting waiter (played brilliantly by Richard Azurdia) who only wants her to enjoy her drink. Mark Jacobson acted double duty as both Anna’s ex-boyfriend and the wormy colleague she cheated on him with, continuing the humor and bringing context to Anna’s ponderings. During the Q&A, Lenker expressed her excitement over how a short play intoxicates a director as well as her passion for how short form can serve as a character study.

Next, we saw “Ricky-Jay Meets Pain” by Neal Adelman, directed by Expo’s own Co-Editor-in-Chief Jessica June Rowe. This was the one piece that wasn’t published in our “Wonder” issue, but many of us have been waiting for years to see this honorable mention winner from Angels Flight + Literary West editors Michele Raphael and David Lott’s Flash 405: “Blue” performed. Ben Bergstorm as Ricky-Jay and Thamus Rounds as Uncle Don-Don brought Rowe’s and Adelman’s visions—and characters—to life, infusing the play with all the humor and disfunction inherent to the script. In the Q&A, Rowe, who frequently writes short plays with Playground-LA, spoke to the need to immediately establish a world in a short play. Whether through a stage direction or a first line of dialogue (in this case: “I mean: isn’t there an easier way to get you your drugs than me jumping off the roof of my dad’s trailer, Uncle Don-Don?”), the first lines of a short play give the director something they can turn into a scene, and a scene which the characters can support or subvert.

Comedy continued as we met up with a woman who might have been the last person to return a DVD to Blockbuster in Matt DeNoto’s “DIANE vs. DIANE vs. DIANE,” directed by Matthew Singletary. This play has everything. It has a giant squid. It has Moulin Rouge references. It has a gambling ex. It has sword swallowing. It has what might be the worst Queen karaoke ever performed. It even has an actual DVD. And it was amazing. With the incredible cast: Joan Kubieck, Cassidy Davis, Kay Capasso, and Brian Graves, the audience easily pictured a complete theatrical production. Both Matt DeNoto and Matthew Singletary joined us for the Q&A. While writer DeNoto talked about how the play was inspired by a Playground-LA tall tales prompt and how he sought the right mission around which to build a modern tall tale, director Singletary spoke to writing on the blank page, which gives the writer “the opportunity to fall in love.”

Finally, Erin McBride Africa directed Jeffrey Lo’s “Millennial Artist of Color.” Though not officially published in Exposition Review, Lo references this piece in his interview from our “Wonder” issue. Africa gave the audience much to consider in her direction of movement in which Jay (Anthony Teves), a millennial artist of color (hence the title), attempts to express his vision to a panel of white critics, played by Thamus Rounds, David Salper, Ben Bergstorm, and Maureen Lee Lenker. The physicality of the critics surrounding Jay only further isolate him from connecting with the academic art community. When Africa spoke of the play in the Q&A, she informed the audience that while the play is only two pages and seems to be a tiny moment, it stands in for a reoccurring experience and stereotypes that make a big statement.

Following the Q&A moderated by Expo’s other Co-Editor-in-Chief, Lauren Gorski, we opened the stage to our audience. We gave them ten minutes to write on CD Eskilson’s Flash 405: “Legacy” theme (winners coming soon), and had a chance to hear a few readings that transformed the plays performed and the words spoken in the panel into new works-in-progress. Actor Thamus Rounds delighted the audience with a piece about clearing his throat, and Lenker proved short plays really don’t give the director time to get sick of a piece by writing and reading a piece inspired by “Anna Considers a Cocktail.”

We are grateful to all who participated and came out to see the words leap off our “pages.” Stay tuned to our Facebook, Instagram, and Twitter accounts, and subscribe to our newsletter to be the first to hear about our upcoming events. For those of you who want the chance to see your pieces performed or read at future #ExpoPresents, we’ll be announcing our final 2019 Flash 405 theme soon. Submit your scripts and writing in all forms!