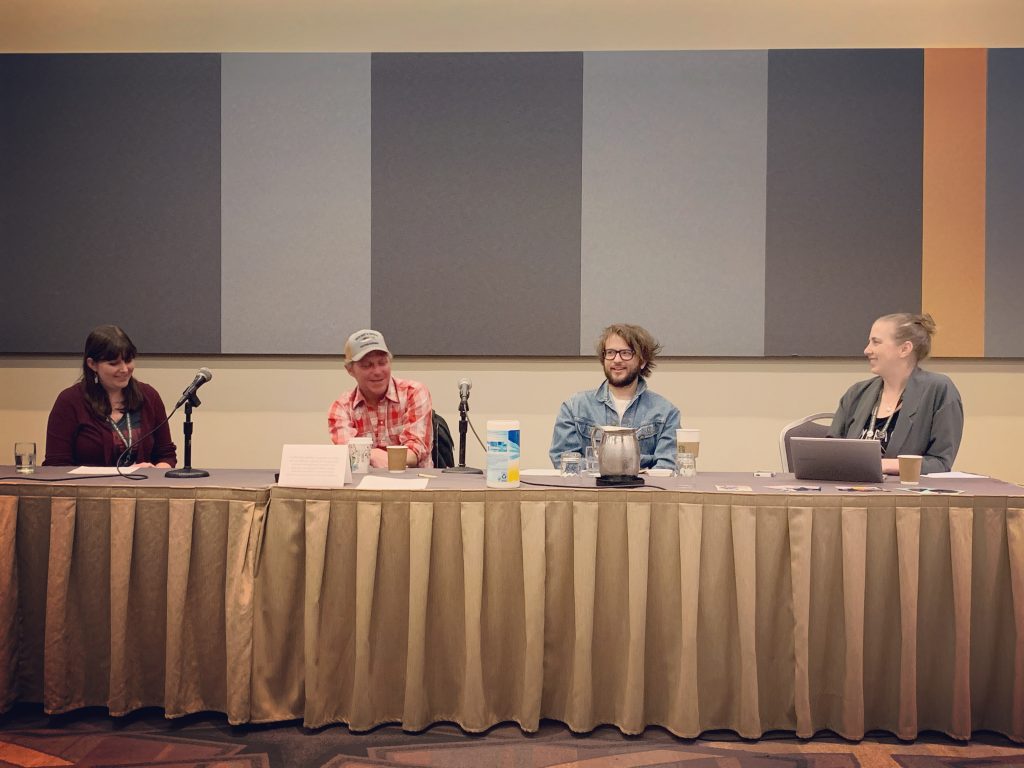 #AWP2020 was one for the books, and not because of the usual literary masses swarming the host city. The Association of Writers and Writing Programs (AWP) Conference in San Antonio started on March 4th just days after the Mayor declared a public health emergency when someone who tested positive for COVID-19 had been released from the nearby Air Force Base where 100 cruise ship passengers had been quarantined. The declaration was made in order to protect the city from any other evacuees from entering, but ultimately was denied by the courts. However, within hours of this declaration, the organizers of AWP had a tough choice to make in whether or not to move forward with the conference.

They decided to move forward and laid out a safety plan to include more access to sanitizers, education on hand washing, and enforcing “no hand shaking, no hugging.” Social distancing was not yet in the media, though it would be a week later. However, even with the encouragement of the conference organizers, many organizations and universities decided to cancel their trip for the safety of their members and students. The usual 12,000+ plus attendees dwindled to what was rumored to be about 5,000.

With that context, a few of our Expo editors decided to continue in their plans with the expectation to cancel our panel on playwriting if necessary. Thankfully, our panelists traveled locally from Texas and the decision to move forward with the panel was greeted with a great turnout and an audience eager to discuss plays, theater, and the transition to production.  What started with a bit of madness, ended up being a much more intimate AWP with longer conversations, last minute panel additions (one of us even joined an editing panel!), and plenty of the River Walk and Texas history to explore.

Here’s more on our panel discussion, if you missed it!

Our Co-Editor-in-Chief, Lauren Gorski, moderated the discussion alongside panelists Neal Adelman, Josh Inocéncio, and Jessica June Rowe. Jessica, Expo’s Fiction Editor, stepped in for Jelisa Jay Robinson, who was unable to attend. Even though Jelisa was absent, Lauren was still able to share her story and practical advice with the audience from their conversations in preparing for the panel. Annlee Ellingson, Nonfiction Editor, took photos.

The discussion began with everyone’s entry into playwriting. Both Lauren and Jessica had early mentors in the Master’s of Professional Writing Program at USC, which encouraged them to join Playground-LA. Neal began in a fiction program, and then went off to pursue an MFA in playwriting after realizing that he was much stronger and more confident in writing plays. Josh and Jelisa were involved in theater, and were interested in using writing as a way to tell stories that reflected their backgrounds and experiences. 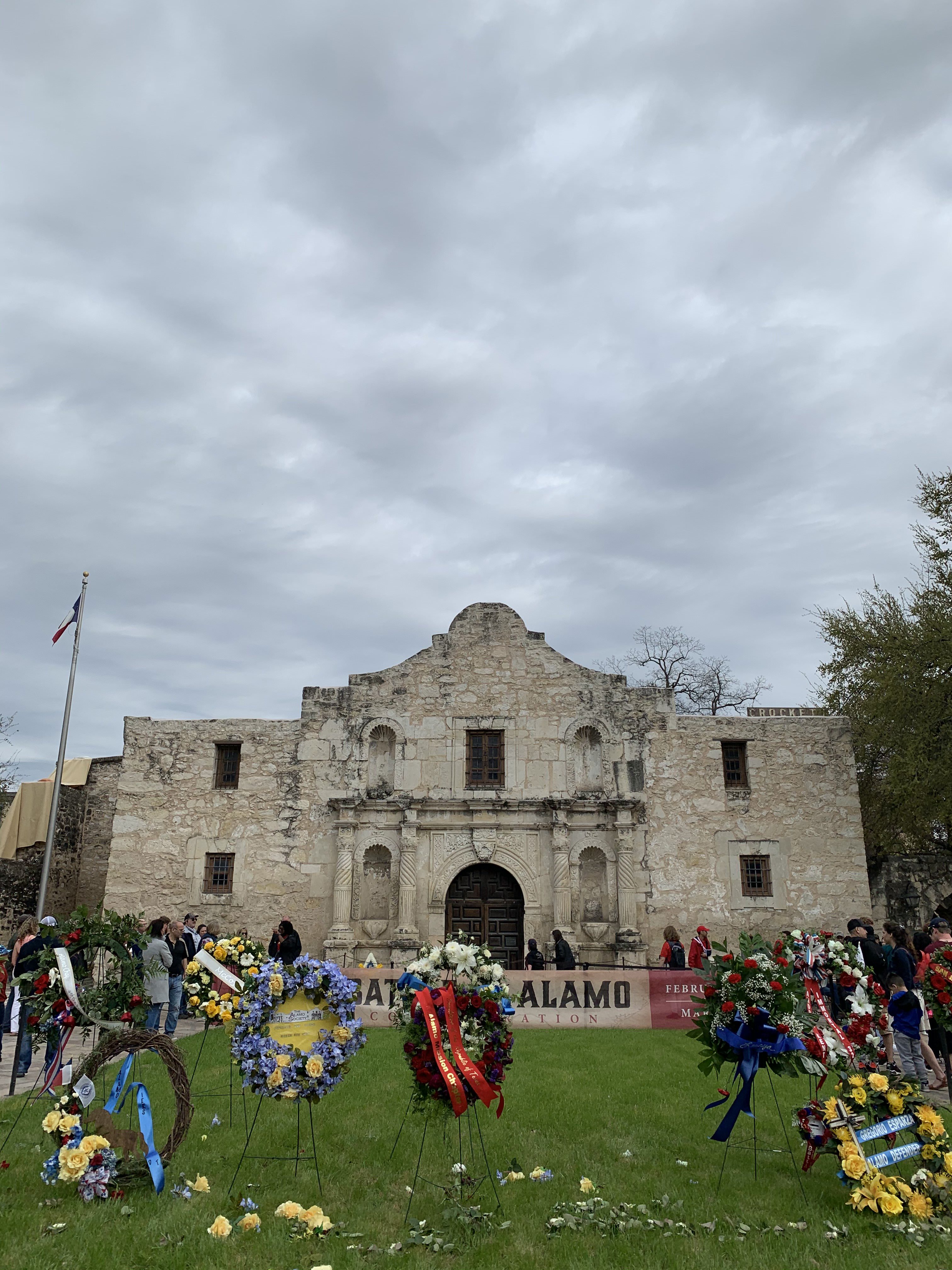 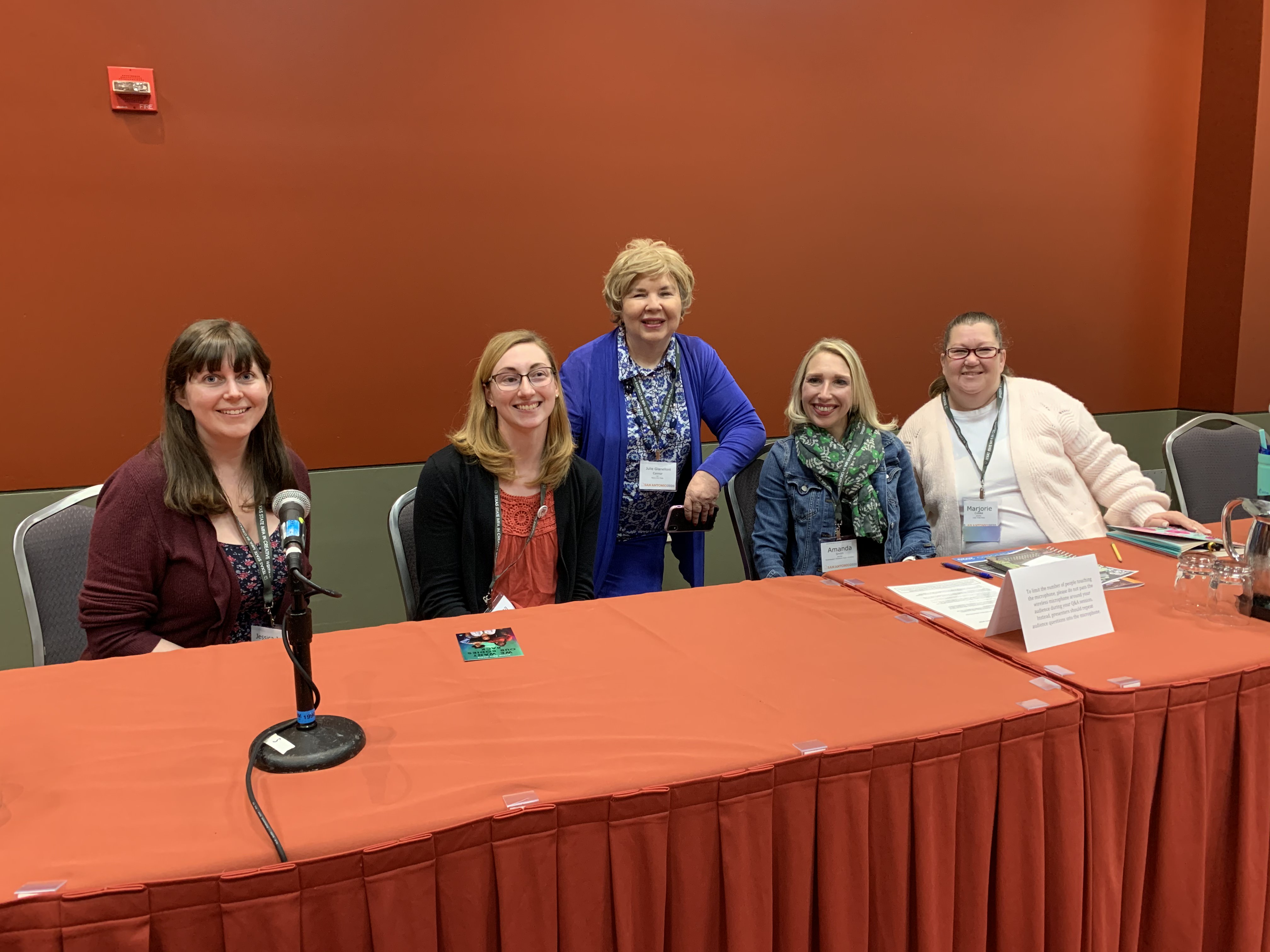 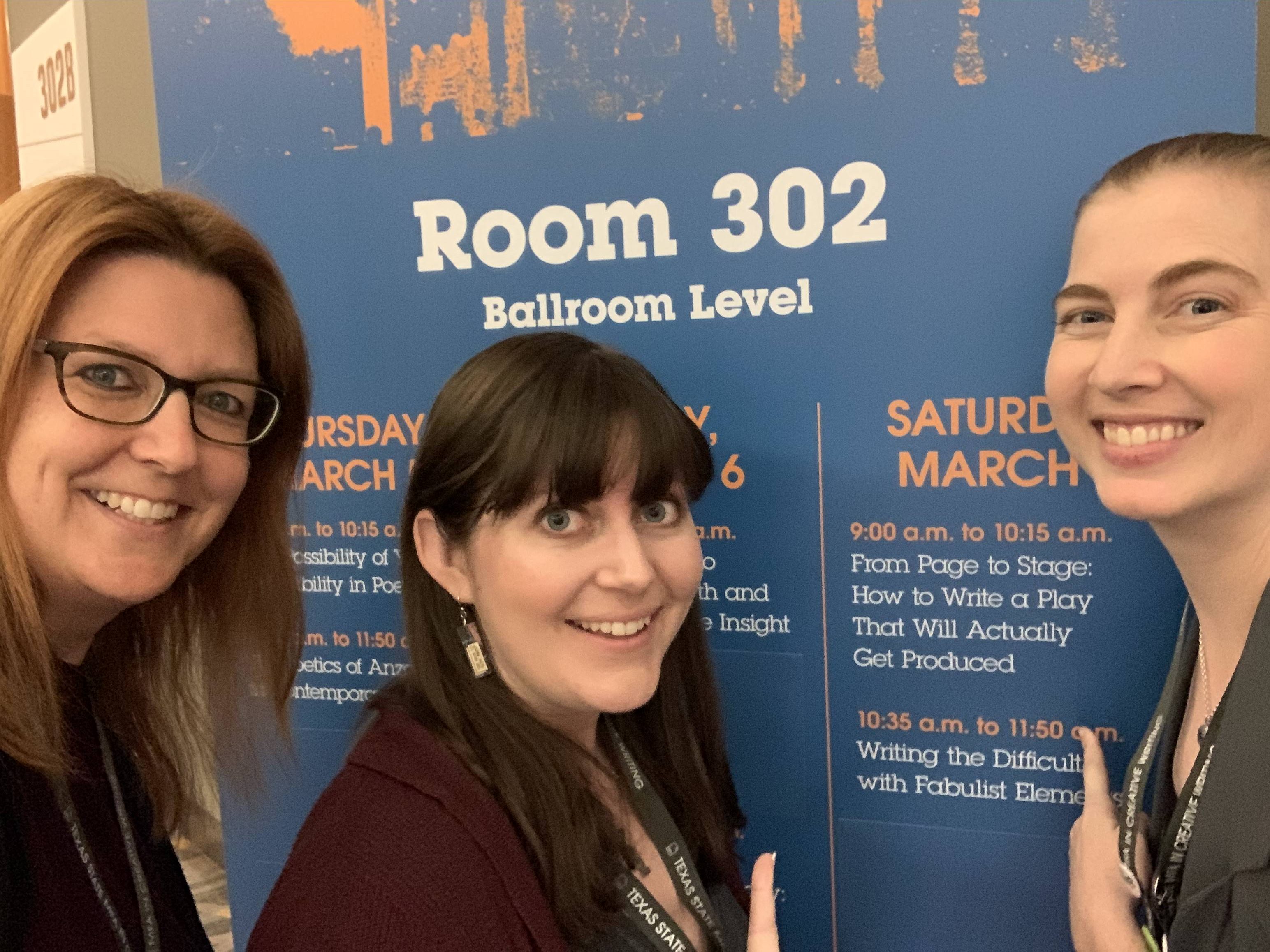 Annlee, Jessica, and Lauren outside of our panel room. 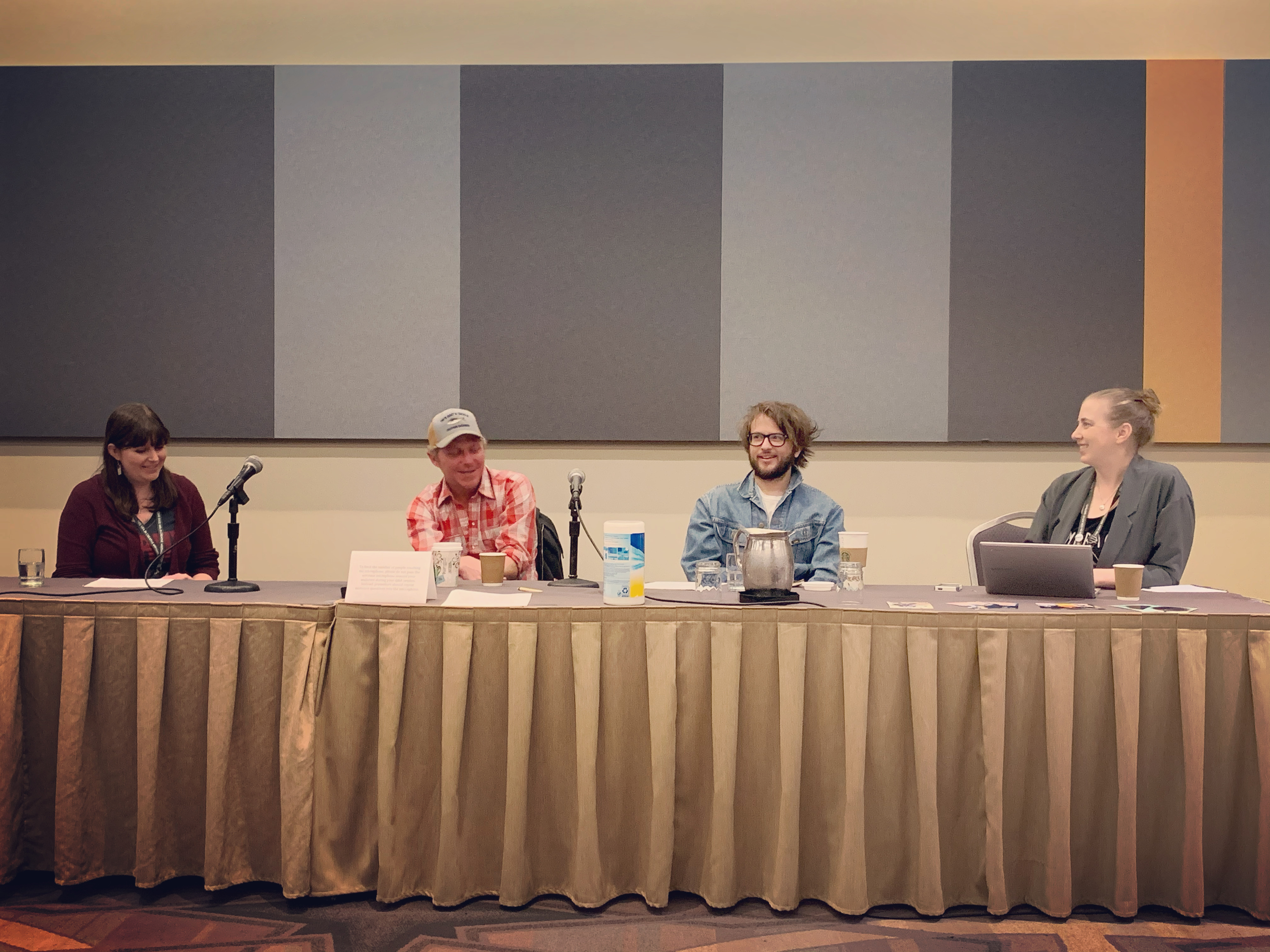 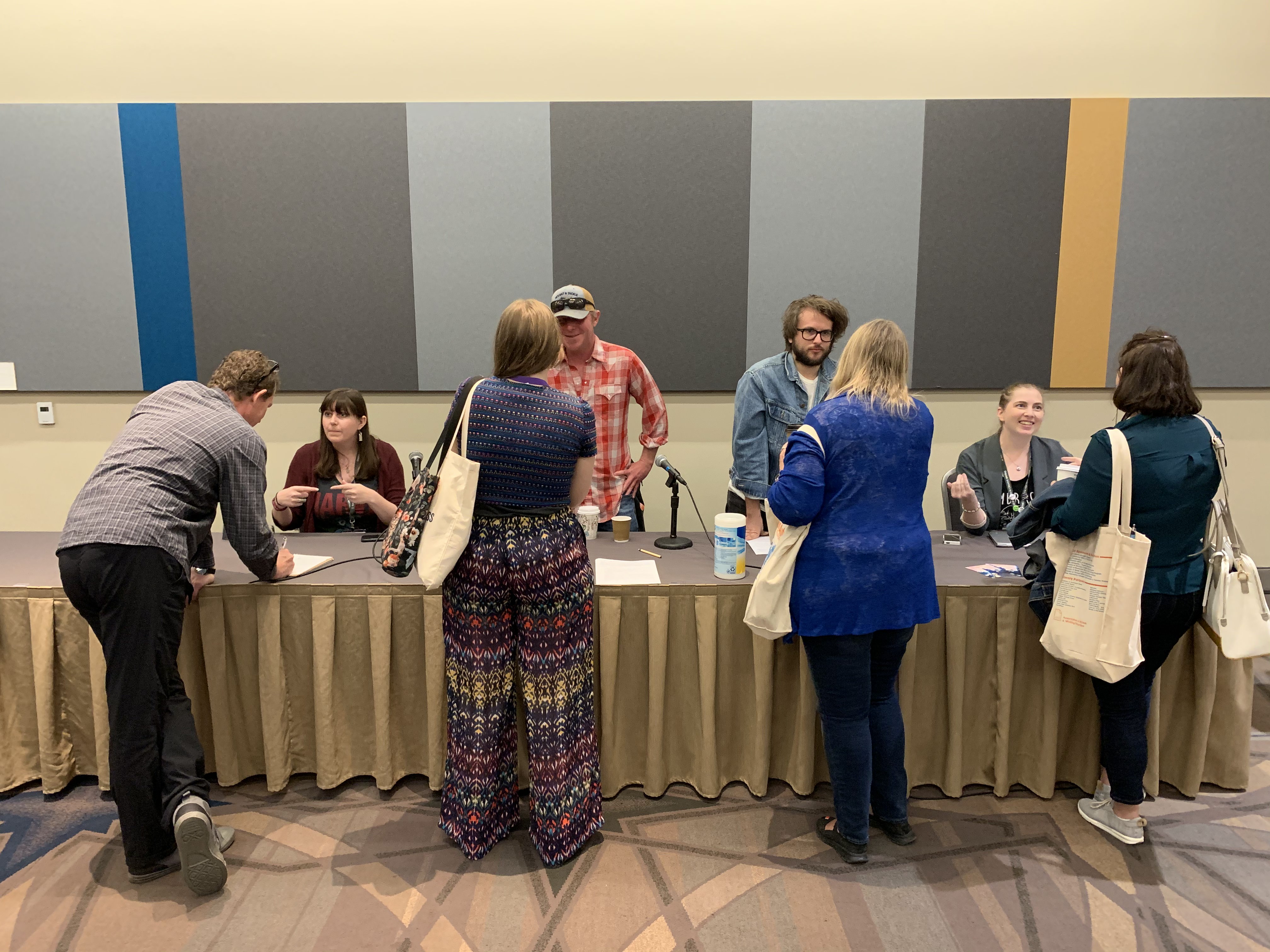 One of the biggest differences between writing plays and writing in other genres is the relationships that develop between a playwright, directors, actors, stage managers, etc. Building those relationships and collaboration is key to developing work and ultimately production. Neal compared it to putting a band together and that the writer is only one part of the process. You need everyone else to help create the music.

Josh decided early on to explore self-producing. He had mentors that inspired him to include entrepreneurship into his production plans, so that when he took his one man show on tour he didn’t need to pay for venues and was able to crowdfund any out-of-pocket costs. His advice is to build an online presence and a pitch-deck to present to theaters (and their audiences) so that they feel compelled to want to produce your work.

So, how can writers get started right now in submitting their plays for opportunities to be produced? Here are a few resources all of our panelists shared as valuable to their experience:

Another way to get your foot in the door is to attend productions around you. Be open to getting involved in your local theater, even if that is just volunteering as an usher. The more you become engaged in a community, the more opportunities that will open up. In fact, Jessica shared that she rarely looks for opportunities as a playwright because they usually come to her by her own connections. Jelisa also fondly remembers the Austin Latino New Play Festival, one of her first ever developmental workshops, that gave her a community of artists invested in her work and the confidence to keep at it.

By the end, we had some great questions from the audience on the challenges of living outside of a big city without much theater (the answer? send your work to other cities and get your neighbors together to have a table reading!); how to deal with formatting (the answer: you do you); and more. The discussions continued as the next panel arrived and we wandered into the hallways.

We’d like to thank all of our panelists for their time and commitment, especially during this time of uncertainty. AWP was much more intimate overall, and while it was not what we unexpected — it was invaluable nonetheless.

If you weren’t able to attend AWP in San Antonio, we hope to see you in Kansas City next year!