What should I read write next? It’s a question we all ask ourselves time and again, especially during submissions season! As any writer knows, one of the best ways to ensure your work gets published is to submit it to the right publication. That means doing your research: checking out who and what a journal publishes, reading past issues, and making sure your work is a fit (or writing something new to fit the spirit of their publication).

Fortunately, if you’re thinking of submitting to Expo, we’ve done your homework before you! For this month’s Expo Recommends, our Vol. III editors are recommending pieces from our past issues to give you a better idea of the work we love and insights into why certain pieces were chosen for publication.

Read on to find recommends from each of our genres, then head over to our Submittable to send us your work!

From the Expo Editors:

The stories I’m pulled to always seem to have a sense of duality. Whether it’s two separate conflicts happening on top of each other—a boy looking to impress a girl as he tries to overcome poverty or a new friendship being formed through generations of cultural angst—or a singular conflict uniting different entities—like exposing your child to pain—these narratives are aware of a greater universe.

With “Orbit,” I think of more than literal space (moon, stars, spaceships, all that). I think of relationships, places, timelines. In the fiction piece “Spring Ice,” a neighbor hears a sound like a gunshot. He wonders if it’s the ice breaking because of spring, but as he listens more closely, he knows it’s not. In this riveting story, experience impacts perception. Each character is set on his or her path and only when they look out at each other is there any sense that life means something. The narrator, a storyteller himself, recounts the events leading up to the gunshot—retracing the same milestones only to arrive at a new conclusion now that he knows the outcome. It challenges readers to think about the narratives happening every day around them—in this greater universe ones that we often forget.

I’m a big fan of flash fiction (or short form in any genre, really). It’s incredibly difficult to write something short enough to qualify as flash that also has the same complete narrative arc of a short story with thousands more words at its disposal. It’s also a shame when we find a great piece that’s weighed down with “clever” dialogue or beautiful turns of phrase that ultimately add nothing to plot or emotional development of the story. I’m constantly blown away by the breadth and quality of work we receive for each new round of our Flash 405 contest, but we typically don’t get that many flash submissions for our regular issue.

That’s why “Cathy” by Christina Craigo was an instant stand-out—not just for its form, but for the fact that it has elements of everything Expo loves: engaging characters; well-paced, layered action; turns and surprises that pay off in the end; and all of it navigated in such little space (454 words, to be exact).

The first few words alone are packed with personality, the phrase “sixteen and emo” establishing a strong sense of voice, sharp and irreverent, while also giving us context and conflict for the rest of the story. It gives the piece an instant energy, rooting us in the narrator’s world even as her clearly biased point of view weaves a thread of tension that pulls you through the story, toward the reveal of Cathy’s fate behind closed doors… only to have it immediately, delightfully offset by an unexpected twist. I love the emotional complexity of the final paragraph, as Craigo manages to swiftly transition from horror to humor, petulance to pain and back again. The first and final lines of your story are so important (so important, you guys), and “Cathy” is bold and brilliant from start to finish.

There are works that mirror this, outside of the flash form. “Artifacts” by Maryann Aita is a great example of a piece that hooks you in right out of the gate, and uses a hybrid prose-script format to express complex emotions in a compact way, while providing a unique twist on a well-tread topic. Lena Ford’s play “The Newlywed” keeps its dialogue and stage directions short and sweet, stripped down to give readers, actors, and directors the space to breathe their own interpretation into the work. These pieces work on multiple levels, making them a pleasure to revisit, knowing I’ll get something new out of them every time. 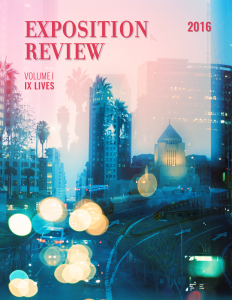 An important fact about me: I read a lot of Chuck Palahniuk as a teen before graduating to Joan Didion, Jay McInerney, Bret Easton Ellis, Joe McGinnis Jr., and Nick McDonell, who all tell similar tales of emotional devastation and collateral damage. Now I read a healthy mix of Stephen King, various tell-all memoirs, and AdAge (my day job is in marketing). Anyway, my fellow editors will think I’m so predictable when they see this, but I’m still so obsessed with Conor Teevan’s short story “Tokyo Princess” from our 2016 issue “IX Lives.” It’s a compulsively entertaining peek into the narrator’s prolonged and absurd downward spiral. Every sentence comes with a punchline—which sometimes feels more like a punch. Stakes build and get serious fast, and the story unfolds in increasingly terse, vicious and visceral language. Halfway through my first read, when a character uses the bizarre and original phrase “stress orgasms,” I was sold. It’s a piece that comes to fiery, despondent life in the first few words and deposits you squarely into a very different world from the one you’re in—fulfilling the exact purpose for which I read fiction.

Affectionately referred to internally here at Expo as “the shit story,” the title of Melanie Kachadoorian’s essay “Merda di Scrittrice” from Volume II: Surface translates from Italian as “writer’s shit”—an accurate descriptor given the piece tackles so many writerly obsessions: language and history and science and personal experience.

In a journal that promotes multiple genres—across its contents and within individual submissions—“Merda” infuses a moving memoir about Kachadoorian’s complicated relationship with her enigmatic father with a survey of Italian artist Piero Manzoni’s Merda d’artista (1961), a work composed of his literal shit; the scientific explanation for why shit explodes; the origins of the word “shit”; how fossilized shit upended our understanding of when humans arrived in North America; and how what we do with our shit defines who we are.

It’s a tour de force of research and reflection that, like its subject, lingered with me long after I first read it and, unlike its subject, I’ve enjoyed revisiting since. I am thrilled to serve as the nonfiction editor on Volume III: “Orbit.” Please, send me your “writer’s shit”!

“In Darkness with the Ramirez Sisters, Alessandra R. Castellanos (Poetry)

I was one of the poetry readers for Vol. II, “Surface,” and I was absolutely floored by Alessandra R. Castellanos’s submission “In Darkness with the Ramirez Sisters.” Alessandra captures an entire perfect little world in her eight stanzas—or imperfect, I should say, as she brings such emotional chaos to her measured lines. There’s nothing physically harmful about what’s depicted, but the poem drips with danger through her word choices: chlorine burned; Smacked girls; three pubescent jaguars; clawing each other’s legs; The smell of vultures and wolves.

Normally I’m the kind of poet who believes that explaining a poem is like explaining a joke, but it’s hard not to gush in appreciation of all that’s happening here. The calculated mix of six-line and three-line stanzas to ground the action, the focus on an emotional point in time rather than a physical one (despite the Aged thirteen opening), and the wide variety of seemingly disparate images brought together in an earthy clump of wildness all work towards creating a stunning portrait of a moment, a memory, maybe an ideal. It’s a poem that I think about even when I’m not reading it, which is always the sign of something special.

“All That We See or Seem” by Jonathan Kuhn (Stageplay)

I would highly recommend “All That We See or Seem” by Jonathan Kuhn if you’re looking to get inside my head—literally. This piece has everything I like: snappy dialogue that drives the story, clear wants and needs from the characters, and not just a great twist but a twist that acts on the assumptions of the reader and the question of who holds the power.

The Critique and Critical Appraisal by William Powhida (Experimental Narrative) 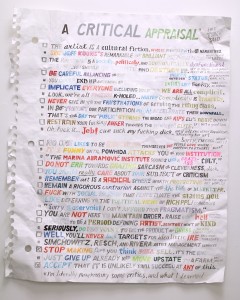 As my two loves reside in visual art and literature, text-based visual narratives—whether in the form of Ed Ruscha’s word plays or Barbara Kruger’s assertive spins on on advertising—have always called to me. So I immediately fell in love with William Powhida’s work. He is exacting, critical, sharp, and witty and manages to be all these things in the beautifully crafted pieces that hover between art and literature. For experimental narratives for a multi-genre journal, the limits are endless and would be blurred even if they were to be found. And Powhida’s pieces create the form of hybridity I love. One can read them as text or look at them as visual plays on color and hand-crafted font, but either way, Powhida delivers a stunning narrative that makes the reader/viewer think. There’s so much to unpack here on many levels, and I love the way his work keeps my mind churning. 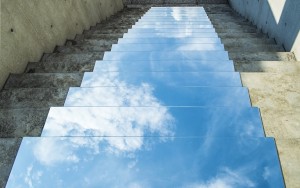 As a nature lover, there is something about land art that has always enchanted me. I also have a particular affinity for reflections, especially those of clouds seen through the mirror of a puddle as the rain clears. Shirin Abedinirad combines both these elements in her installation piece, Heaven on Earth. Though we can’t experience her work in person, I love the hybridity that comes with seeing it in our journal. We have photographs as well as video of an installation, asking us to further question what art is, what its limits are, and how we can experience it. Though here we cannot physically immerse ourselves in Abedinirad’s space, with the photos and particularly the video, we can sit and listen to the birds chirp softly in the distance and watch the clouds pass overhead, perhaps taking a longer look than we would if we encountered the piece in person.