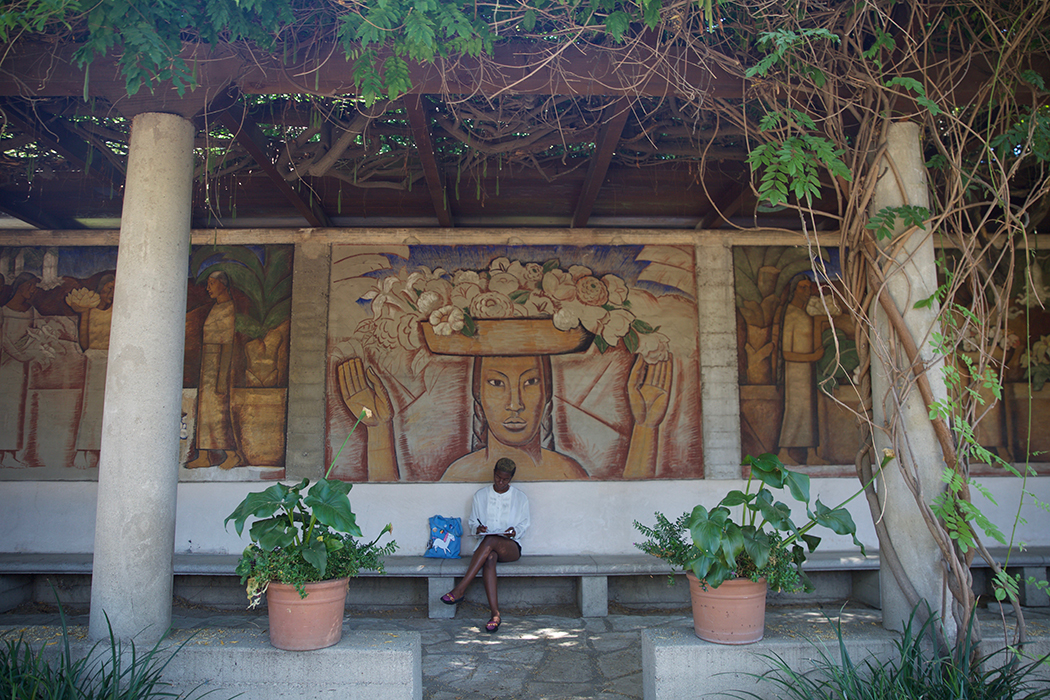 The baby caterwauls, who knows why. You snap
at husband, growl at kitchen mess, can’t think of who
to complain to about your lucky life. Complain

to the mountains, then, they don’t judge. They have actual
snow shining on their heads, and you can see them from this
little street where it never snows. It’s almost cold.

Wrangle her into the tiny coat et cetera. Grab the notebook
and two books you won’t get to read. Carry them like charms, like a memory
of freedom. Get out out out among the sky and the winter citrus alive

yellow on the trees, push the stroller past the construction workers
who step aside and even attempt to wave their cigarette smoke
away as you pass. By the time you reach the secret walled garden

she is asleep. Two bubbling fountains. Piles of wisteria.
Along one wall the mural you came for: the women
like Amazon queens, hauling huge baskets of flowers on their backs

and balanced on their heads: zinnia and hibiscus and armfuls of
white calla lilies, and corn, and fruit, and aloe leaves like spears.
The trumpets of floripondio blossoms dangle behind them,

sweet-scented, heavy. Don’t eat their seeds, for though hallucinogenic,
they can be fatal. The woman at the center wears a crown
of her own braided hair and stares out over your whole life.

Sit where she can see you. Breathe. Watch the green leaves and the bright blue sky
peter out at the end of the wall, the part left uncolored when the artist
died young: umber sketches of desert hills, outlined armadillo

and coyote lurking among them. The women with their long black braids
have a powerful quietness about them. Their eyes like almonds, their hands
monumental and strong. Martínez came to California for his daughter,

Maria, born with a bone disease, a warm, dry climate prescribed
by the best doctors he could find. She grew into health here, and he
did his greatest work, painting prayers of recovery for her:

Madonnas with their round babies, mythic Mexican goddesses,
La Malinche who either helped or betrayed her people (enslaved
by Cortés, then married to him; finally his translator and confidante).

Martínez painted women on the walls of chapels, hotels, cafés,
Beverly Hills mansions, and this garden that echoes Eden.
In this way father and child saved and raised each other.

Your baby keeps sleeping, lulled by the sound
of moving water. What you would not do to keep her
in this world. What worlds you would not keep making

for her survival and your own, even to the point of leaving them
unfinished. You cannot imagine. You can. You are sitting among
undone umber hills, growing cold. Red squirrels hurl themselves

through the loaded lemon trees. Look up. You are inside a walled
patch of sky, really. The blue is framed to show you its value.

Chloe Martinez’s poems have appeared in publications including Waxwing, Prairie Schooner, PANK, and The Common. She is a three-time Pushcart Prize nominee, was a finalist for the 2019 Hillary Gravendyk Prize and a semifinalist for the 2020 Brittingham and Pollak Prizes, and serves as a book reviewer for RHINO and a reader for The Adroit Journal. She is the Program Coordinator for the Center for Writing and Public Discourse at Claremont McKenna College, as well as Lecturer in Religious Studies. See more at www.chloeAVmartinez.com.