This Expo Recommends comes with an exciting announcement: Exposition Review’s panel “From Page to Stage: How to Write a Play That Will Actually Get Produced” has been accepted for the Association of Writers & Writing Programs annual conference, AWP 2020! Our panel will feature writers Neal Adelman, Joshua Inocencio, and Jelisa Jay Robinson with moderator/Editor-in-Chief Lauren Gorski. To share our excitement, we’ve taken inspiration from AWP 2019 which took place in Portland and the panels and writers who inspired us there. 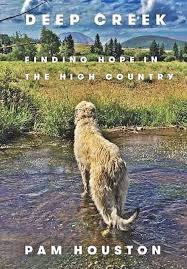 If I’m being honest, I wouldn’t have attended the AWP panel called “Write to Climax: Women Writers on Writing Sex and Intimacy” if Janet Fitch hadn’t been a late addition to the lineup. Janet is a former professor, indirect mentor, and longtime supporter of Expo—a star of the Los Angeles literary community that had the morning before unremittingly pulled the local literati who were also on their way to Portland into her orbit from her seat in the Burbank airport gate area.

But I digress. Before Janet read a steamy passage from her latest novel The Revolution of Marina M. and then delivered a master class in how to write sex, Pam Houston—novelist, short story writer, and essayist—shared a very different selection from early in her new memoir Deep Creek: Finding Hope in the High Country, one that details with painful specificity the ways that her father had abused her.

She paused and then said something along the lines of, “I’ve never read that out loud before.”

The audience applauded, and then as if coming to understand the significance of the moment, applauded some more. And then stood and applauded more.

Deep Creek isn’t about the man who abused Houston. It’s about the Colorado ranch that saved her, the 2013 wildfire that nearly destroyed it, and ultimately her simultaneous wonder at the natural world and grief for its destruction.

As much an intrepid adventurer as a mountain settler, she’s tough as nails but writes with the raw vulnerability that brings an audience to applause—and tears. 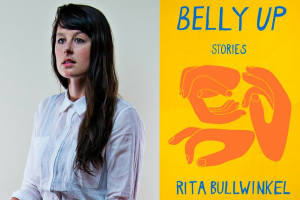 When Expo EiC Lauren Gorski told me that The Conium Review was putting on a masquerade themed lit reading in a Victorian bar, I promptly cancelled plans with my cousin (sorry Marce) and made my way over to Beech Street Parlor: home of delicious fries and the world’s coolest wallpaper.  I hadn’t heard of The Conium Review before, and I only knew Charlie Brown out of all the readers, but Labyrinth was one of my favorite movies growing up, and I have no power over myself when someone mentions a masquerade party…er, reading.

AWP can be overwhelming; you’re swiping past hundreds of writers and publishers at the rate of a frat boy on Tinder, and sometimes it feels like you make just as tentative a connection. However, the intimate reading parlor at Beech Street and friendly Conium Review community gave me the chance to slow down and truly experience the work of an exciting new author.

Rita Bullwinkel seems to flourish in somewhere between the hilariously absurd and the unsettling.  Her deadpan delivery from her debut book, Belly Up, was spot on, emphasizing the surreal world where two parents hire an adult man to cup their teenage daughter’s breasts in place of a bra. Bullwinkel skillfully navigates through the ick factor and gleefully pokes fun at the economy, the job market, and the odd mix of paranoia and laissez-faire attitude that characterize American parenting.

In the wrong hands, this story would be distasteful, yet it’s clear that Bullwinkel has laid a deeper meaning at the foundation of the piece, though the audience is left to puzzle that meaning out for themselves. You get the feeling that Bullwinkel is four steps ahead of you…and inclined to keep it that way. Bullwinkel’s writing is sharp and refined, which makes her subject matter almost grotesquely beautiful, her story has haunted my thoughts every time I walk past the Target intimates section.

Though my initial reasons for attending the reading were not literarily pure, The Conium Review pulled together a strong lineup of authors in an intimate setting that kept me riveted in spite of my growling stomach and aching feet (there weren’t enough Victorian fainting couches to go around). I didn’t know when I walked into that dimly lit bar that I was going to walk out with a new author for the Expo Recommends blog…and my bookshelf.

AWP is an amazing place to find inspiration, and I knew I wanted to soak up equal amounts of panels, readings, coffee house writing time, book fair strolls, mixers, and author signings, with exploring a new city. Turns out, that wasn’t physically possibly. My dream days of spending hours at panels with two to three hours of writing time while also fitting in Portland brunch recommendations (seriously, I think I only got brunch recommendations) turned out to be way too optimistic. So, once I hit the ground and realized there aren’t actually 42 hours in a day, my new goal was to experience at least one thing I could only see or do in Portland that was still on theme for my literary mindset.

Over an internet deep dive, I discovered rave reviews for a debut play, “Wolf Play,” staged at the Artists Repertory. Over and over, theater critics were in awe of the writing, structure, and daring of the piece. In the play, a young Korean boy is “un-adopted” and forced into a new home environment where he struggles with being a wolf and a puppet. (Yes, that is the plot, and I’m describing it terribly. Read a better synopsis here.) As a playwright and Expo Editor who produces annual staged readings every year, this felt like my jam for a Saturday night grand finale.

WOW, DID I MAKE THE RIGHT CHOICE.

“Wolf Play” was, without exaggeration, one of the most well written and dramatically creative play productions I’ve ever seen. It’s funny, messy, and takes advantage of the weirdness of its world to say something really beautiful about the way relationships are formed. Without spoilers, it uses the voice of the child to drive the narrative while always surprising the audience with new ways to convey information and meaning: sometimes through the way a puppet is held, others by the way characters move through a kitchen, or by finding a way to allow a forest and a boxing ring to exist in the same set. I cried at the ending; I cried talking about it; I might be getting teary now as I type.

After the show, the group of us discussed it ad nauseam in the lobby with a cameo from an actor, Ayanna Berkshire, who shared how terrifying the process was with a play this new and experimental (the ending had changed a few times before opening). She praised the writer, crew, and director, Dámaso Rodríguez, for his vision and leadership. Berkshire even shared there were scenes she loved, but the writer would quickly cut them in order to make the entire play tighter. And yet, the writing is such a profound mix of lyricism and authenticity. Even moments where a young boy humorously sneaks sugary cereal into his bowl of bran has more weight than you realize until the ending.

I’m keeping tabs on Hansol Jung. That’s a voice worth hearing and a writer worth aspiring to be. 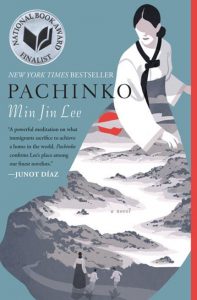 One of the best parts of AWP is getting a taste of the host city’s local literary scene, and you can’t talk literature in Portland without mentioning Powell’s Books. Their headquarters, also known as Powell’s City of Books, is the world’s largest independent bookstore, occupying a full city block, and is a must-visit for any book lover. The Expo editors made our pilgrimage to Powell’s the first evening of AWP, where I impulse-bought a copy of Pachinko after spotting it on a shelf of staff-recommended picks in the Blue room. I almost regretted the purchase—after all, it was only the first day, I had yet to spend a significant amount of time at AWP’s Bookfair, where I would no doubt buy more books than I could fit in my luggage—but that was before I cracked open the first page.

From the get-go, Pachinko is a richly detailed account of a Korean family’s journey through the twentieth century. This is the type of fiction I love most: a story that transports me as well as educates me—in this case, about the little-known history of Zainichi Koreans. The Zainichi are ethnic Koreans who emigrated to Japan while under imperial rule, and their descendants who have remained in Japan as long-term residents without citizenship. Pachinko does a beautiful job of balancing the intimate moments and inner lives of the characters with the broad strokes required to move through so much of history. The result is a bittersweet story of love, shame, and resilience that had me literally gasping aloud in multiple places (—no joke, at one point, my “ohmygodno!” made the person sitting next to me jump in their seat).

Many, many thanks to the staff at Powell’s for the recommendation—which I endorse 200%—and remember to support your local bookstores!

We know AWP 2020 is going to give us even more recommendations. Get your tickets and come meet us there!